You are invited to participate in the 5th Canadian Astronomical Olympiad!

a)     How many times in a Martian day does Phobos rise above the horizon?

b)    Where on the horizon does Phobos rise?

c)     Suppose Mars was inhabited by Martians. Would it be practical for them to create a calendar using Phobos analogous to the lunar calendars we have on earth? There is no single correct answer, but please justify your opinion with three reasons backed up with calculations.

4.     Galaxy. Galaxy M96 in Leo has an angular size of 11’ by 8’ and an apparent magnitude of 10m. The wavelength of light emitted in the H and K bands is shifted by 10.3 Å. Given that the wavelengths of ionized calcium are 3968 Å (H) and 3934 Å (K), find the galaxy’s
a) radial velocity,
b) distance to Earth,
c) linear dimensions,
d) absolute magnitude, and
e) luminosity.
5.     Telescope. The photo below shows a picture of the moon taken at the prime focus of a telescope with a CCD chip with dimensions 22.2 by 14.8 mm. The ratio of the sides of the photo is the same as the ratio of the sides of the CCD chip. Find the focal length of the objective lens of the telescope. 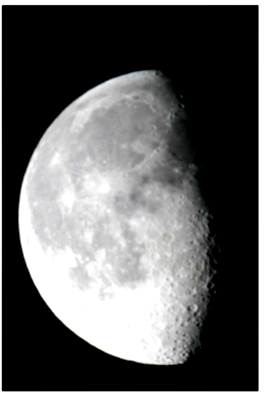 6. Beginner Astronomer. An amateur astronomer (φ = +45°) is observing a galaxy in upper culmination at solar midnight on June 21st (summer solstice). They leave for a late-night snack but end up watching 3 hours of TV instead. When they come back 3 hours later, they look at the galaxy again without repositioning their telescope and of course cannot find it. Not knowing that they should reposition their telescope, they think, “Since Earth moves around the Sun and rotates around its axis, is it possible that an increased distance to the galaxy caused it to become too dim to see?”

Prove this astronomer wrong by calculating the change in apparent magnitude of the galaxy during the time they were watching TV. Also calculate the actual apparent magnitude and find the ratio of the two values. Assume Earth’s orbit is circular and the galaxy is stationary relative to the Sun. You may use the following data about the galaxy:

You think you can solve them? If so, send your answers to info@astroclub.ca  by May 17, 2021. You might be one of the lucky winners who will be selected to represent Canada at International Olympiad on Astronomy and Astrophysics 2021!

Email ThisBlogThis!Share to TwitterShare to FacebookShare to Pinterest
Labels: 5 CAO - 2021