Apply to Participate in IOAA 2016

Once again, we are happy to invite students age 14 to 18 to apply for participation in the International Olympiad on Astronomy and Astrophysics as part of the Canadian team. The Olympiad will take place in India on December 9 to 19, 2016. Applications are accepted before June 1, 2016.

To apply, please send an essay (up to 2000 characters) listing your achievements in physics and astronomy along with reasons why you should be on the team to info@astroclub.ca. Preference should be given to winners of Canadian Association of Physics prizes, as well as holders of recognitions from other physics and astronomy competitions and events in 2015-2016. Selected members of the team will be given training free of charge during the months of September through December 2016.
As of 2013 Russian-Canadian Educational and Recreational Centre and its President Mr Konstantin Toubis with the support of Canadian Ministry of Science and Technology formed and supported Canadian National team to be sent to International Astronomy Olympiads. Ever since team is being trained by Dr Vera Zagainova organiser of IAO 2011. In 2014 Canadian team won gold in Team Competition (Read more).
For more information on IAOO 2016 please visit  the official site of the Olympiad.


Participation of Canada in
X International Olympiad of Astronomy and Astrophysics
Young astronomy students from 41 different countries of the world recently participated in the International Olympiad in Astronomy and Astrophysics. It was an opportunity for pre-university students from various countries to meet and make friends with students with similar interest from all part of the world. In this IOAA, 221 participants from 48 teams came and spent 10 days together competing and interacting with each other, from 9 to 19 December 2016.
India is one of the oldest countries in the world with its prehistory going back to almost 2 million years. It housed one of the earliest large scale civilisation, the Harappan civilisation from 7000 to 2000 BC and has not looked back. It is home to some of the finest architecture in the world from Taj Mahal to the magnificent Sun Temple at Konark, which the participants to the Olympiad visited.
India is also a vibrant democracy with a lot of interest and investments in pure sciences in general and astronomy in particular. Apart from several meter class astronomical telescopes, it hosts the world’s largest meter wave telescope and has recently launched a state of the art multi-wavelength astronomy telescope. Our hosting of the 10th International Olympiad in Astronomy and Astrophysics was a part of our continuing tradition of encouraging young students to appreciate and enjoy the excitement of this oldest of pure sciences. The programme also offered an opportunity to meet Indian students beyond the participants through an active outreach programme associated with the event.The Canadian team consisted of the winners of the International Astronomy Olympiads and the CAP contest, as follows:
1. Anna Khoroshilov
2. Li Han Chen
3. Steven Mai
The team was accompanied by two leaders:
Dr. Vera Zagainova
Dr.Yuri Khoroshilov 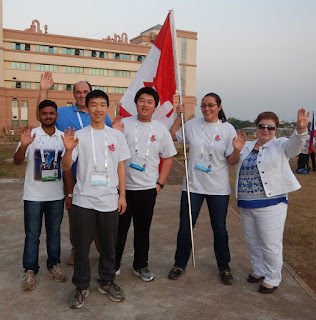 Russian-Canadian Educational and Recreational Centre of Toronto hosted theoretical and practical training of the participants of the Olympiad.
Express gratitude to Prof. Patrick Hall, Prof. Michael De Robertis and Prof. Paul Delaney of Faculty of Science for all the support and coaching provided to participants of International Astronomy Olympiad, as they were getting ready.
The 10th IOAA was very well organized. IOAA was hosted in one of the most picturesque and ancient city of Bhubaneswar, which boasts of a rich tradition of religious architecture, art form and cuisine. The city of Bhubaneswar, is also the capital of the state of Odisha. The host institute was National Institute for Science Education and Research (NISER).
For those of you who are new to the event, IOAA comprises of three rounds i.e. theoretical test, observation test and data analysis test, whose total counts towards medals of participating students. In addition, there was also be a team competition to determine the best team.
Anna Khoroshilov received an Honorable Mention! Congratulations!
Posted by Nadia Zagainova at 8:05 PM