Toronto Star about our team

Canadian team over the moon after winning astronomy Olympics 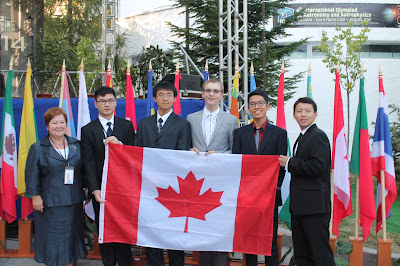 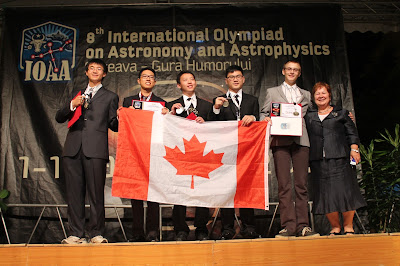 By: Louise Brown GTA, Published on Fri Aug 15 2014
Their mission was to stop an asteroid from crashing into Earth, and they had just 90 minutes.
Grade 11 student Daniel Pachkine of Thornhill Secondary School was the youngest member of the Canadian team huddled on a Romanian university campus, scrambling to plot the trajectory of a missile that could save humanity — using Plasticine, string and some of the best young astronomy smarts in Canada.

This doomsday problem was given to all 39 high school teams from around the world at the recent International Olympiad on Astronomy and Astrophysics — including powerhouse crews from Kazakhstan, Russia and Iran; all racing the clock alongside the astronomy club from North York’s Russian-Canadian Education and Recreation Centre, which was participating for only the second time.

On this teamwork event the Canadians won gold, and they were over the moon.
“I think we got the answer more accurately than the other teams when we were calculating the trajectory the missile would need to destroy the asteroid before it hit Earth,” said Daniel, 15, one of five Canadian teens who travelled to the competition in Suceava. In individual events, his team member Yan Huang won silver and teammates Jason Cheuk Nam Liang and Yuan Qi Ni took bronze.
They are all part of a weekend high school astronomy club that meets with astronomer Vera Zagainova from Kazakhstan who now works in Canada. It is one of numerous after-school clubs in different subjects run by the Russian-Canadian Centre.

“We really like when we go to the park in Newmarket and look through the professor’s telescopes; it’s extremely interesting,” said Daniel, whose father Anton Pachkine said he is grateful Zagainova donates her time to the young people, and that the club offers the program for free.
The astronomy club is popular partly because it’s a subject students don’t typically study in school, suggested Konstantin Toubis, a real estate broker and president of the centre.

“I’ve loved astronomy myself since I was 5 years old; my dream was to fly and be an astronaut, but I have done a lot of jumps with a parachute,” said Toubis, who hopes the club might draw some sponsorship from the Ontario or Canadian government, as is common among clubs from many of the countries that send teams to the astronomy Olympics.

“We have one club for children aged 7 to 11 and another for those 12 and over, and they really learn about the galaxies and solar systems – they get lots of homework too,” said Toubis.
Once the students arrive at the Olympiad they have no further contact with their coaches, he said, and they must turn in all smart phones so they can get no outside help on the answers.
“But when they’re not busy with their smart phones, they also have time to talk to the other teams and make friends.”

At the Olympiad, students spent more than a week competing on space theory and having to identify celestial bodies on star charts and in a planetarium.

But the night they had their outside telescope test, Mother Nature interfered, as she often does with stargazers.

“We went outside with telescopes but couldn’t see anything,” said Daniel. “It was cloudy.”
Posted by Nadia Zagainova at 6:17 PM