A Happy Sky over Los Angeles 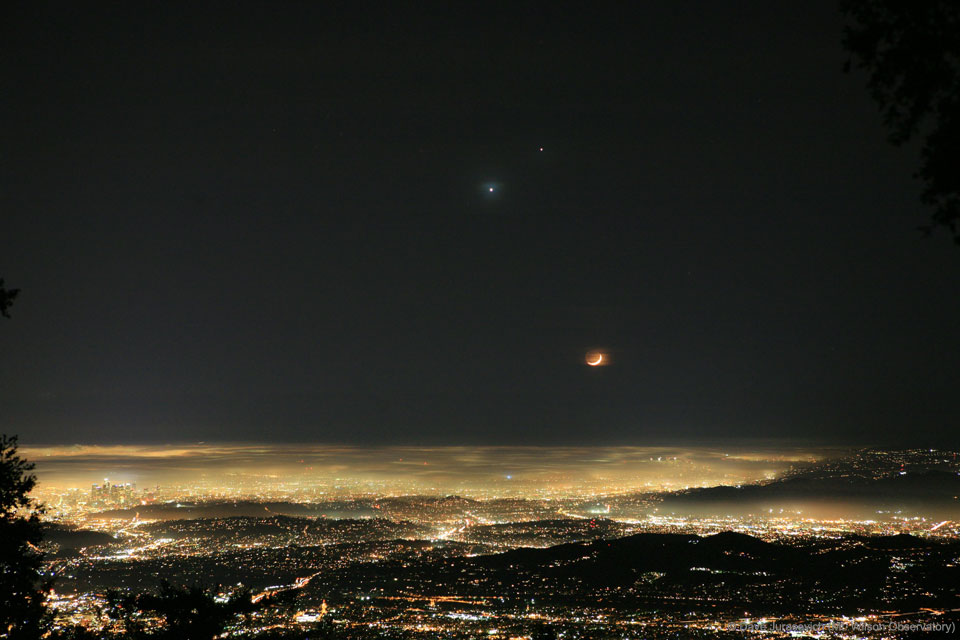 Sometimes, the sky may seem to smile over much of planet Earth. On this day in 2008, visible the world over, was an unusual superposition of our Moon and the planets Venus and Jupiter. Pictures taken at the right time show a crescent Moon that appears to be a smile when paired with the planetary conjunction of seemingly nearby Jupiter and Venus. Pictured here is the scene as it appeared from Mt. Wilson Observatory overlooking Los Angeles, California, USA after sunset on 2008 November 30. Highest in the sky and farthest in the distance is the planet Jupiter. Significantly closer and visible to Jupiter's lower left is Venus, appearing through Earth's atmospheric clouds as unusually blue. On the far right, above the horizon, is our Moon, in a waxing crescent phase. Thin clouds illuminated by the Moon appear unusually orange. Sprawling across the bottom of the image are the hills of Los Angeles, many covered by a thin haze, while LA skyscrapers are visible on the far left. Hours after the taking of this image, the Moon approached the distant duo, briefly eclipsed Venus, and then moved on. This week, another conjunction of Venus and Jupiter is occurring and is visible to much of planet Earth to the east just before sunrise. via NASA http://ift.tt/2yQsEy2
Posted by Nadia Zagainova at 9:08 PM