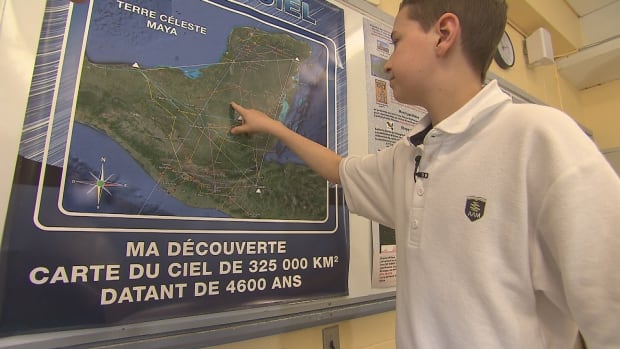 A 15-year-old boy from Saint-Jean-de-Matha, Que., has discovered what could be the ruins of a lost 4,600-year-old city in Mexico by comparing ancient star charts and the positions of known Mayan ruins.
William Gadoury, a Grade 10 student at Académie Antoine-Manseau in Joliette, became interested in Mayan civilization in 2012 and wanted to understand how the Mayans chose where to build their cities.
He turned to the stars to try to find the answer and came up with a compelling theory.
"The Mayans were extremely good builders, but they often built in places that made little practical sense — far from rivers, far from fertile areas. It seemed strange for a civilization that was so intelligent," he told CBC News.
"I knew they were good at astronomy, so I tried to make the link."
Gadoury studied 22 Mayan constellations and found that when they were overlaid on a map they matched the placement of 117 known cities. But a 23rd constellation was incomplete.
"I realized then that one city hadn't been discovered," Gadoury said.
Gadoury pored over Google Earth satellite images, looking for disruptions in the dense jungle canopy that could indicate an overgrown city in the location he had identified.
He found evidence of what he believes are the platforms of Mayan pyramids in the Google Earth images, but he needed more conclusive proof.
In 2014, the then 13-year-old's findings won first place at his school science fair and earned him a trip to an international conference in Quebec City organized by the Canadian Space Agency.
The teenager's work left agency officials deeply impressed, not to mention excited by the prospect of finding a lost Mayan city. 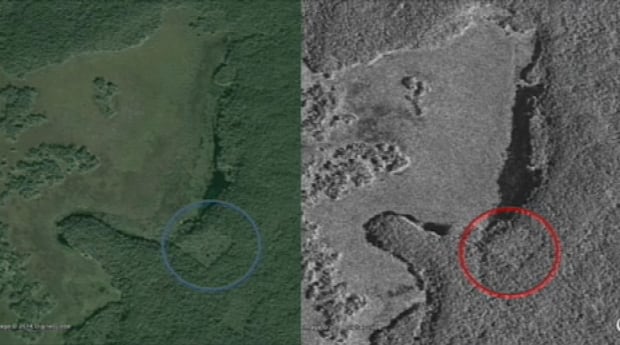 A satellite image (left) added weight to William Gadoury's theory that he developed using Google Earth images (right) that he had found the platforms of lost Mayan pyramids. (William Gadoury/CSA/Google)
Gadoury used the opportunity to request images captured by the space agency's RADARSAT-2 satellite of the area he had pinpointed in order to confirm his findings.
"He was very persuasive," said CSA project officer Daniel Delisle.
"He was very organized. He speaks French and English and had a binder full of possible questions. He had done a lot of research and had contacted a lot of people."
His efforts paid off, and the CSA provided him with the images he was after.
"This is something we usually do with scientists that submit proposals to us, but since William's proposal was so extraordinary, we decided to support him as we do regular scientists," said Delisle.
Rough outlines visible in the satellite images provided additional weight to Gadoury's theory, but it will now take a ground search to confirm or deny the existence of structures hidden within the dense vegetation.
"The satellite image just gives us a horizon of information — we really need to go underneath [the forest canopy] to see if there's anything," Delisle said.
"But just by looking at the canopy itself, it's possible to see some linear features that do not look natural and would suggest that there is some infrastructure underneath the vegetation."
"We are pretty sure that there are some features hidden there … I think there's a high potential of finding a city," Delisle said.
While Ivan Sprajc, an archeologist and Mayan expert based in Ljubljana, Slovenia, praised Gadoury for his efforts, he said the findings have "no support."
"In archaeology, we have been using remote sensing for quite some time, and obviously have some experience in recognizing archaeological features in the Maya Lowlands," he wrote on Facebook.
"The rectangle on the published image, supposedly a Maya site, is but an old milpa or cultivation plot, abandoned years ago, but definitely not centuries ago."
Whether his findings lead to a lost Mayan city or not, they are clearly leading to a bright future for the young archeoastronomist.
The teenager has been invited to provide an article to a scientific journal, and he's received invitations to the national science fair at McGill University and an international conference in Brazil.

Posted by Nadia Zagainova at 8:40 AM

Email ThisBlogThis!Share to TwitterShare to FacebookShare to Pinterest
Labels: News